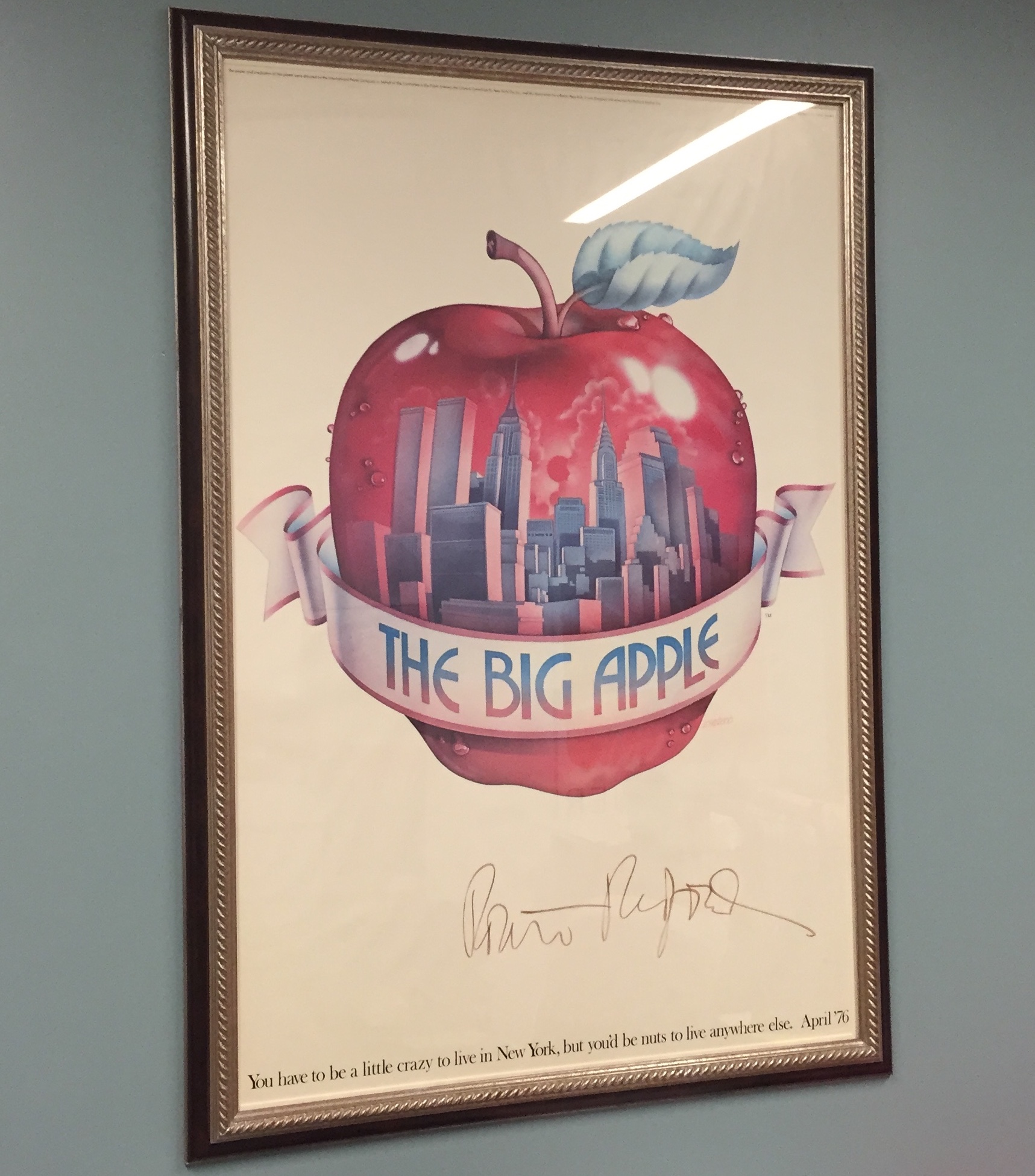 New York – June 30, 2020 — The Big Apple poster created by Ogilvy & Mather in 1976 and signed by Robert Redford says it all, “You’d have to be a little crazy to live in New York, but nuts to live anywhere else.” The iconic framed poster has followed Germinder + Associates founder and president Lea-Ann Germinder, APR, Fellow, PRSA everywhere she’s lived and every office she’s opened since 1976.

On July 1st, as Germinder + Associates celebrates the 20th anniversary of the first opening of its New York City office, the poster special meaning. The poster was created in 1976 at a time New York City was going broke. Now, New York is in the midst of a pandemic and the poster is on display for all the Zoom calls as a good luck charm. New York will be back, and in the meantime, the company is marking its 20th anniversary with an affirmation of its commitment to New York City, mentoring and increasing diversity in the public relations profession.

The company formally opened its first New York City office in the Hudson Square area of Greenwich Village. It had launched Goodnewsforpets.com earlier in the year. The company has also had offices in the famous Meat Market district, Park Avenue and now is currently located in Midtown at 747 Third Avenue.

“There isn’t any area of New York City we don’t love and we look forward to when we can fully operate back in New York full-time. We were thrilled to open our doors in Kansas City in 1998, but to open the office in New York City in 2000 was a dream come true. While I grew up on Long Island, I came to the city every chance I had, and to me, even as we still battle the pandemic, the Big Apple is still the greatest city in the world,” said Germinder.

Mentoring is also important to Germinder. She has established intern programs at every agency she has joined before starting her own firm in 1998. As 2013 PRSA-NY Chapter President and as a longtime Big Apple Sponsor, she has made it a point to reach out to sponsor PRSSA students. In 2019, she received the PRSA-NY’s Makovsky Excellence in Mentoring Award in recognition for her years of mentoring public relations professionals. She is a member of the PRSA-NY Past Presidents Council.

“We are so incredibly grateful to all of the support and volunteerism that Lea-Ann has shown to PRSA-NY over the years,” said PRSA-NY President, Kellie Jelencovich. “Lea-Ann is such an outstanding mentor and is always guiding and helping students from PRSSA, as well as young emerging professionals with their careers. We are deeply appreciative to all that she has done to give back especially to students from diverse backgrounds, where Lea-Ann is constantly creating opportunities to increase diversity, equity, and inclusion. This is an incredible time to be celebrating 20 years in the Big Apple and showcasing her students and their work in the process is typical of the opportunities she creates.”

As part of the PRSA-NY mentoring program, Germinder is currently guiding Alexandra Butman through the job-seeking process, as she is set to complete her graduate degree at NYU. In May she accepted the PRSA Champions challenge to help students impacted by the pandemic by hiring two students remotely from her alma mater, the University of Dayton. Abby Crotty, a senior and Zinaejah Ozier, a junior are the two interns. An unexpected development was the Black Lives Matter movement and how it would impact the work – in a positive manner. Listen to their latest video here.

While the agency has always considered itself committed to diversity and inclusion, honest conversations became front and center. The agency recently became the 40th firm to sign the Diversity Action Alliance pledge to adopt, champion and track diversity within the organization and the public relations profession. The Diversity Action Alliance is an alliance of the national top public relations organizations. The company also made a donation towards this initiative and other initiatives and made its own statements in support of Black Lives Matter.

Abby Crotty is handling Goodnewsforpets.com content, the Goodnewsforpets 20th Anniversary Charmed by the Love contest with brand partners, and handling donation communications to pet shelters. She’s found a way to incorporate the Black Lives Matter movement and message into the work she’s doing for Goodnewsforpets. Zinaejah Ozier is helping with Germinder public relations. Now Zinaejah Ozier, is conducting “Interviews with Zinaejah Ozier” with black leaders in her voice.

“What these young women have given back to me in terms of taking an honest assessment of where we stand and analyzing how we can all move forward is nothing short of amazing. Talking about 20 years of public relations successes, that’s easy for me. Openly standing up for what you believe in, that takes guts today. It is especially fitting to celebrate them on the occasion of our 20th anniversary. They are representative of all the young professionals I have had the privilege to work with, mentor and who mentored me back at Germinder +Associates,” Lea-Ann Germinder, APR, Fellow PRSA.

The Germinder Power of Pink Program (formerly Germinder Giving Back) is a companywide umbrella program developed to ensure the company and its employees contribute in meaningful ways to the local communities in which they work and in the specialized industries and professions they serve. The initiative is providing pro bono counsel during the COVID-19 Pandemic and supported the Black Lives Matter movement and mentoring for students, both monetary and in-kind support. The 2020 interns were hired under this program. For more information, visit www.germinder.com or on Instagram @GerminderPR or Twitter @GerminderPR

The interview series by Zinaejah Ozier kicked off its third interview with Troy Blackwell Jr. who is the National Director of Press Advance, Obama White House Alum, and Board Member at BPRS-NY and PRSA Tri State.

On June 30, 2020, Blackwell will be speaking at the LGBTQ Experience in Public Relations event at the Museum of Public Relations. Celebrating the 50th anniversary of Stonewall, which granted rights to LGBT members, this event is aimed at showing what it’s like to be in the LGBTQ community while also in PR.

“We’re going to talk about the last 50 years of pride and about ways that agencies can be more inclusive when marketing or working on clients that do work in the LGBTQ space.”

Going into the interview, Zinaejah Ozier knew that she would be able to relate to the unique experiences that Blackwell encountered due to his membership in both the black community and the LGBTQ community. In response to this, Blackwell spoke on how these unique experiences make way for the importance of telling your story and inserting yourself into an industry that is in dire need of more diversity.

“Don’t shy away from the industry because of where the industry is right now,” said Blackwell Jr. “I think also sometimes being different, offering a unique perspective, and being able to tell stories that are different from everyone else in the bunch, that unique perspective can actually make you stand out and it can make people more interested in you. You’ll be surprised how far that that can take you.”

He made it clear that coming from a marginalized group does not make you susceptible to the things that the world tries to put you in. You are not what society says you are, you are what you make of yourself.

To watch the full video on uniqueness and gaining perspectives, click here!

For her second interview, intern Zinaejah Ozier reached out to Dr. Courtney Campbell, DVM, DACVS-SA and recipient of the 2020 Global Pet Expo’s media personality of the year award. Campbell is a board-certified veterinary surgeon and host and producer of Vet Candy. As an aspiring entrepreneur, Zinaejah thought it would be a good idea to interview this young black business owner and leader due to his expertise in the professional world.

One of the main things that she discussed with this amazing leader was the idea of building a career while still in the process of finding your passion. Dr. Campbell shared some advice on finding out what it is you really love within your everyday activities. He specifically talked about his journey following his youthful love of wildlife and medicine.

“When I was growing up, I’d jump outside and explore the woods, look under rocks, and I really started to appreciate wildlife,” said Dr. Campbell. “Once you appreciate wildlife and you fuse that with medicine, anatomy, and physiology, a career in veterinary medicine just makes sense. You’ve got your love for animals on one side and then you’ve got a love for medicine and science and it’s a beautiful marriage.”

When asked about having a mentor while on the journey, Campbell stressed the idea of having a set goal, a timeline, and having objective criticism during the process.

“I don’t care how old you are or where you are in life, you need a mentor,” he said. “What gets measured, gets improved. As you’re achieving your goal and doing it in record time but not doing it right, then you’re not really improving.”

Dr. Campbell mentioned how he, himself had and still has many mentors, whether it is for professional development or personal life. As we have different sides to our lives, he talked about how helpful it can be to have a mentor for each of those sides.

To watch the full video on mentorship and more, click here!

This interview is the first in a series of interviews from University of Dayton junior and summer Digital Associate Zinaejah Ozier. As an aspiring leader Zinaejah made an effort to contact Proctor-Rogers as she is an executive coach with many years of mentorship under her belt. As Ozier’s series of interviews is also an attempt to grow a connection and listen to the words of the wise, this candidate was a definite fit.

THE KEY TO SUCCESS: MENTORS PLUS

The interview consisted of insights on how Proctor-Rogers made her way through the professional world over time and her emphasis on the importance of having a mentor. As explained in the video, we get to hear about the many mentors that Cheryl has had growing up including her parents and peers within the organizations that she took part in.

“Having mentor as part of your personal cabinet is critical to your success,” said Proctor-Rogers. “I can’t imagine how I would have been able to achieve everything I could.”

To watch the full interview and gain insight on Cheryl Proctor-Rogers for yourself, check out the link to the video here: https://youtu.be/DBxytGLg0dw

The Power of Pink: Leadership Interviews With Zinaejah Ozier

As a next step in our Power of Pink Initiative and in light of recent events, we’re introducing a series of interviews with black leaders across the country conducted by Zinaejah Ozier, a junior at the University of Dayton and incoming treasurer of the PRSSA chapter at Dayton. The goal of the series is to join in the current conversation through the eyes of a young leader speaking with black leaders – and learn!

Zinaejah is already a budding storyteller, a journalism turned public relations major. Coming into the internship, Zinaejah expressed her desire to learn about the stories of the people whose footsteps she planned to follow. Using her own journalist approach, she’ll conduct video interviews and ask unique questions of each interviewee in an attempt to grow her understanding of how each person achieved success and how she can do the same.

“I’m excited to have this opportunity to conduct these interviews at Germinder + Associates,” said Zinaejah. “It allows me to gain a broader understanding of the public relations profession and the opportunity to connect and network while I am gaining experience on the job.”